Basic dyes(These dyes are also known as cationic dyes)
This a class of synthetic dyes , that act as bases and when made soluble in water , they form a colored cationic salt , which can react with the anionic sites on the surface of the substrate. The basic dyes produce bright shades with high tinctorial values, on textile materials.
Properties of basic dyes Basic Dyes are cationic soluble salts of coloured bases. Basic dyes are applied to substrate with anionic character where electrostatic attractions are formed. Basic dyes are not used on cotton as the structures are neither planar nor large enough for sufficient substantivity or affinity. Basic dyes are called cationic dyes because the chromophore in basic dye molecules contains a positive charge. The basic dyes react on the basic side of the isoelectric points. Basic dyes are salts, usually chlorides, in which the dyestuff is the basic or positive radical. Basic dyes are powerful colouring agents.It’s applied to wool, silk, cotton and modified acrylic fibres. Usually acetic acid is added to the dyebath to help the take up of the dye onto the fibre. Basic dyes are also used in the coloration of paper.
Ionic nature:-The ionic nature of these dyes is cationic.
Shade range:-These dyes exhibit an unlimited shade range with high tinctorial strength, brightness and many colors are having fluorescent properties.
Solubility:-The solubility of these dyes is very good in water ,in the presence of glacial acetic acid.
Leveling properties:- These dyes have a very high strike rate , therefore leveling is poor.
Exhaustion :- cationic dyes exhaust at a variable rates, K values are used to define the exhaustion characteristics of the cationic dyes. K=1 means the fastest exhaustion , while K=5 means the slowest exhaustion. So while making the combination shades the dyes of similar K values must be used.
Affinity:- These dyes shows a very affinity towards wool , silk and cationic dye able acrylic, but have no affinity towards cellulosics. To dye cellulosics with basic dyes the material must be treated with suitable mordanting agents.
Fastness properties:- The light fastness is poor to moderate , but wet fastness is good.
Dyeing mechanism with basic dyes?
Dyeing of acrylic with basic dyes
The most common anionic group attached to acrylic polymers is the sulphonate group, -SO3-, closely followed by the carboxylate group, -CO2-. These are either introduced as a result of co-polymerisation, or as the residues of anionic polymerisation inhibitors. It is this anionic property which makes acrylics suitable for dyeing with cationic dyes, since there will be a strong ionic interaction between dye and polymer (in effect, the opposite of the acid dye-protein fibre interaction).
Dyeing of wool with soft winding machine 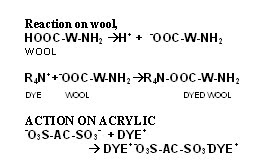